Acquisition Search & Study We ran a unique program under contract with mainly Fortune 1000 corporations who wanted to discover and acquire the top “not for sale” privately held companies in product areas related to their current lines. The clients paid our base costs up front, and a bonus on close.

We brought home forty-three acquisitions, made by such clients as Celanese (3 acquisitions), McGraw-Hill (2), Thiokol Chemical (2), and McCormick & Company (1).

The success of our interviewing techniques and market segmentation methods created demand for a broader range of applications. Among other things, clients asked us to:

From years of client ratings we were able to plot their meaning:

Our study quality was at the “satisfaction” level. We went through training in Dr. W. Edwards Deming’s philosophy for constant process improvement and realized that we needed to make changes to our system in order to average “Excitement” level.

Our study producers were primarily graduates of University of Virginia, Duke, Princeton, Yale, and William & Mary. They typically worked for 3 years, then left to pursue an MBA.  As talented as they were, it became obvious that the study quality ratings depended on the relative seniority of the actual producers.

Through statistical charting and brainstorming, an astonishing but simple way to reach Excitement Quality leaped out at us:

Our officers decided to reorganize for the sake of long term quality, which also allowed them to:

This pleasantly surprised Harlan, who had reached the point in his career and age where he was setting up an ESOP sale of the company to the employees. It looked like he would “work for a few more years, and retire.” But Harlan decided that although he did want to change his routine of the previous 35 years, he did not want to retire, ever.

So the change was made with three-year notices to employees.

Since 1994 our Senior Project Managers have been career committed and are now incorporated licensees of Harlan Brown & Company, Inc. The benefit for our clients can be seen in the average of our study ratings since that time: 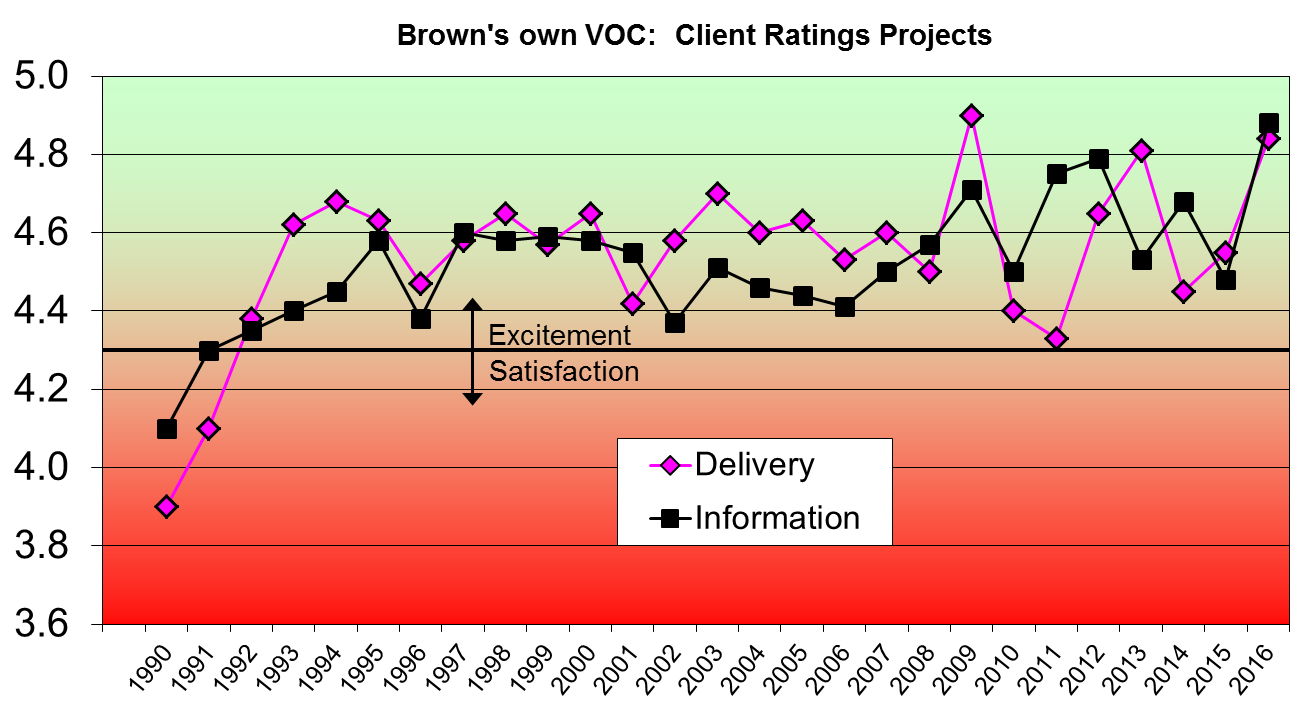 Our study process continues to improve with the direction and encouragement provided by our clients, including our participation in planning sessions inputing our objective and customer oriented viewpoints. We have added “supplier perception” studies to assess how well clients manage their supply chains, and we see an increase in study updates that allow clients to track their progress compared to benchmarks identified in previous studies.

We also now offer training in our core competence, the Art & Science of Telephone Participation, starting with the book Five Enticing Messages available on Amazon, plus on-line training programs on our technique.